It's a dad thing 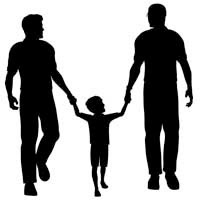 My latest novel is called GO TELL IT ON THE MOUNTAINS from Dreamspinner Press and will be hitting the shelves later this month or early February. It's the third book in the Sugar Tree series, which follows the antics of Wiley Cantrell, a mouthy gay single dad just trying to make his way in the world best he can.

I've been asked if the books are autobiographical and whether the character of Wiley is based on me. The short answer to both questions is no. I'm not a Southerner though I do live in Tupelo, Mississippi now. I've never been mistaken for someone who was sexy, or opinionated, or who had a sarcastic remark for any occasion. While I'm a father, I'm not the father of a special needs child.

But the long answer? Perhaps.

As I worked on the edits for GO TELL IT ON THE MOUNTAINS, I realized I was writing about myself.

MOUNTAINS is about Wiley and his partner Jackson adopting two children. This happens six years down the road after they lose Wiley's son Noah, who was never expected to live but held on for thirteen years. His loss, while not completely unexpected, was a painful chapter in their lives. Wiley eventually decides he wants to adopt. This is a way to move on, to start living again, to jump back into the business of living and loving and keeping the faith. But it's not easy.

I'll let readers decide whether Wiley and Jackson are making the right decision or biting off more than they can chew.

When I began the Sugar Tree series a few years ago, adopting a child was very much on my mind. In fact, I've flirted with the idea of adoption for many years but there never seemed to be a right time. Last year, however, I began to attend the necessary parenting classes and begin the application process, which I'm currently in the middle of.

As an openly gay single man living in Tupelo, Mississippi, the most religious state in the Union, my chances are not good. Still, the heart wants what it wants. And irony of sitting around and writing about an imaginary gay single dad raising a child has not escaped me. I've been writing about what I wanted to do myself.

At one point during GO TELL IT ON THE MOUNTAINS, Jackson says, "When you said you wanted a dozen children, I thought you were exaggerating." Wiley, in typical fashion, replies, "I was. I'll settle for six or seven." Wiley then reminds Jackson that he's the sort of guy who "just needs to love my babies," a fact of life he made perfectly clear when they first met.

Wiley is a family man. He loves kids. He loves his family. He's not much for drinking or carousing or hanging out at gay bars (which is good, since there aren't any in Tupelo). He'd much rather play Frisbee in the park with his son than hit up the latest drag show. When loneliness and horniness get the better of him, he will jump in the sack with the first thing that comes along (something for which he has been roundly chastised by many readers). At the end of the day, though, Wiley is not about casual sex or a promiscuous lifestyle. He wants family. Commitment. Permanency. He wants kids and a husband to dote over. He wants to build a future and live a normal, happy life. What he needs are other people to get out of the way and let him do it.

He finds himself deeply in love with a flawed man, but it's okay because Wiley is flawed too, and he knows it.

While I am nothing like Wiley in appearance or manner or station in life, I am very much like him in many other ways.  In what he values, what he wants, what he copes with, what he tries to overcome, even the mistakes he makes.

Like Wiley, there has been trauma in my past that I needed to deal with ... and almost couldn't. Wiley learned to forgive and move on. I have too. Wiley's latest trauma, the loss of his son, has him desperately trying to find the meaning behind it. He wonders why God would take his only child. He's mad. He's angry. He's hurting. He's a little self-destructive.

He eventually concludes that God sent Noah into his life to teach him how to deal with messed up kids. Let's face it: Adorable as he was, Noah was a hot mess, a child born addicted to meth, a child haunted by demons and disabilities and birth defects, a child who was never expected to live.

But Wiley found a way to deal with it, a way to reach him, a way to give him at least a few years of happiness.

Wiley believes adopting a messed up child that no one else wants will somehow give meaning to Noah's life. These is a purely arbitrary decision Wiley has made, based on his own internal beliefs and ideas. We could argue whether it makes sense or whether he's just fooling himself, but that's not the point. Wiley looks at the situation and assigns his own meaning to it, and that's all that matters. Wiley says, "I need to know Noah's life wasn't just some cosmic joke." He needs to know there was some point to it, some higher purpose, some deeper meaning.

We all do the same. We look at terrible things that happen and try to find the reason, try to assign some meaning that will let us sleep at night.

Myself, I look at my childhood, at what people did to me, at what my parents did, and sometimes I am gripped by the feeling that it was all pointless and stupid and cruel. "A cosmic joke." I ask myself: Why do we allow children to grow up in such homes, with such people? Why doesn't someone do something? If God really does love us so much, why does he allow our most vulnerable to endure such agony? Why is he silent? Why doesn't he intervene when children are being hurt?

This business of assigning meaning is something I've struggled with my whole life. 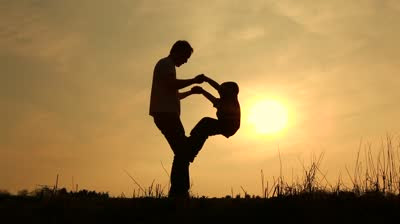 Which takes us back to adoption.

When I first began attending parenting classes and filling out all the endless forms, I was asked over and over: Why do you want to adopt? I thought I had to have some compelling and fantastically altruistic reason. So I gave long answers on how I had an unhappy childhood, how I could help these kids, how I understood what it was like to know you were not wanted by your own parents, how I knew the pain of having parents who let you down and let you fall through the cracks because they were too busy with their own drama to notice. I talked about how being a dad was the best thing I ever did in my colorful life, how I loved being a dad and wanted to do it again. I repeated the story about the man who complained to God about all the horrible things that go on in the world. The man asked, "God, why don't you do something?" And God replied, "Why don't you do something?"

Those are all perfectly good reasons, of course.

The real reason is much simpler: I want to love and be loved. Part of it is altruistic. Another part is perfectly selfish. I don't want to be eighty years old and dripping into my adult diapers and not have at least one person visit me in the nursing home. I'm sorry if that's selfish, but it's the truth. I want to love and be loved. Like everyone else, I want family, people I can count on, people who can count on me. I want to go home and cook dinner and help with homework and kiss the boos boos and attend the football games and help a child grow up.

Wiley has a similar thing going on. He struggles to assign meaning, but at the end of the day, it's plain to see: He just wants to love and be loved. He wants to fuss over and love on his babies. That's just how he is. It satisfies some need he has deep down inside. To be useful. To be included. To be part of life. To live and love, to give and receive, to find joy and bliss in others. To be part of the human family.

The child I'm hoping to adopt is a special needs boy who is now ten years old and who has been with his current foster family for two years. They don't have enough money to adopt him. I may never have a chance to be his father. I've resigned myself to that. Still. I needed to be able to look at myself in the mirror and say I tried.

I hope readers enjoy GO TELL IT ON THE MOUNTAINS. I put a lot of heart and soul into that book and I hope it shows. And while some are going to be mad at me over the loss of Noah, I think, when you reach the end of the book, you'll see that life does indeed go on. And it goes on because it has to.

As always, thanks for reading.
Posted by Nick Wilgus at 11:00 AM